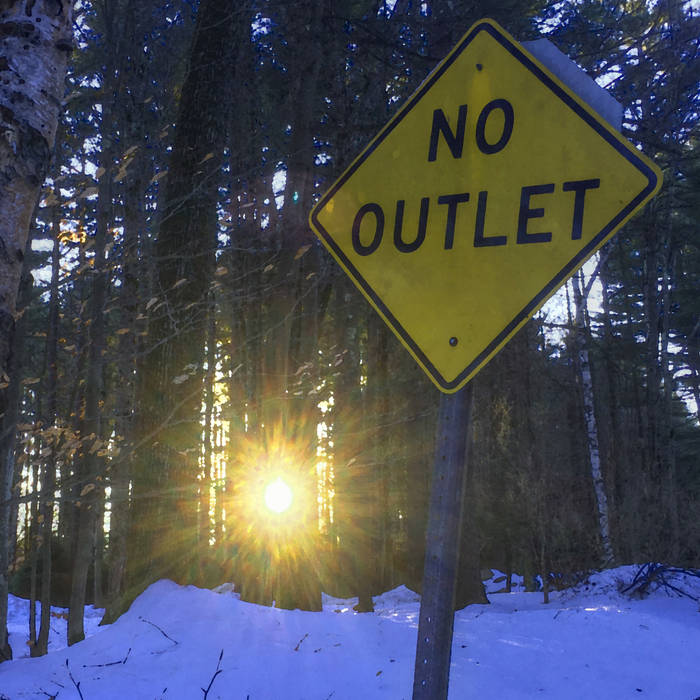 NO OUTLET is a compendium of unreleased tracks commemorating the band’s ten years together in the Bay Area. Volume 1, released January 6th 2019, covers the years 2007 through 2013.

Drums and bass to “A Minor Disaster” engineered by The Norman Conquest, 2009

This is sort-of half remix of our early song “Disaster” sung in a minor key, half unreleased track. “Disaster,” along with “Analemma” and, later, “Saturday Afternoon on the Median” was originally part of a live set called “Crazy 8s,” which also included a couple of musical fragments that got excised as the set developed.

The quieter, polyrhythmic harp/hammer dulcimer/wineglasses/bells section which forms the centerpiece for this version is one idea that I always regretted having to abandon (for the sake of the flow) and I’ve had this recording of it kicking around since 2008. Somewhere along the line Kate improvised some bassoon over parts of this alternate version, and I’ve also added a number of layers to it over the years. Though the lyrics and rhythmic feel are almost the same as the original “Disaster,” the mood is quite different and it feels like a new song to me.

I wrote this when I started turning from contemporary instrumental composition back towards “folky” songwriting, around 2006. Being one of the first songs out of the gate, it created a nice slipstream for its successors but wore itself out in the process. The lyrics are a barely-revised journal entry.

The recording I put together in subsequent years. Emily brought a great energy to this on the 5-string, and I added banjo and a little percussion to get it moving a bit. There was a nice upright bass part from Jason as well, but it unfortunately it succumbed to Arbitrary Digital Immolation.

Emily and I used to record some of our improvisations with Jonathan Russell and Jacob Kramer, among others, and this piece derives from one of those. Here we were playing chords in rhythmic unison, with one person cuing the entrances, picking the pitches out of the air.

I liked part of the session so much that I went back and notated it, then re-recorded it with the original players, replacing Jacob’s classical guitar with bassoon (sorry Jacob, I thought a sustaining instrument would sound better). Included in this sound-collage are pitch-shifted parts of the original improvisation, including some eerie sections where we were all singing through our instruments, as well as Canada geese I recorded flying South for the winter over Alameda, California. The plaintive mood here always had a strongly autumnal feeling to me, so I named it “All Saints” after November 1st. Every fall since 2005 or so, when we did the original improvisation, I would open up the file and work on it a little bit.

An oddity from around 2011-13, out of the cluttered world of a musical hoarder. I kept working it and reworking it each time I made an album and it never quite got there, until after Night Loops, when I gave it up along with “The Matron.” And yet I still like this warthog.

Fun with water. I tried to meld my voice with Shauna Jones’ alto to create the impression of a single, androgynous singer. Originally recorded circa 2006 but reworked in vain for each album through Night Loops. Listen with headphones for a thorough head-cleaning.

DON’T MAKE ME SLEEP ON THE FLOOR

Another Travis-picked song from the early years that we rehearsed a little but never really developed. Inspired by so many one-second views down tiny streets in small towns in the middle of the country that seemed to want more attention. Unlike most of the other tunes in this compilation, a lot of this recording is fairly recent.